Exhibition: Holidays after the Fall.
Transformation of Socialist Holiday Resorts
on the Adriatic Coast of Croatia 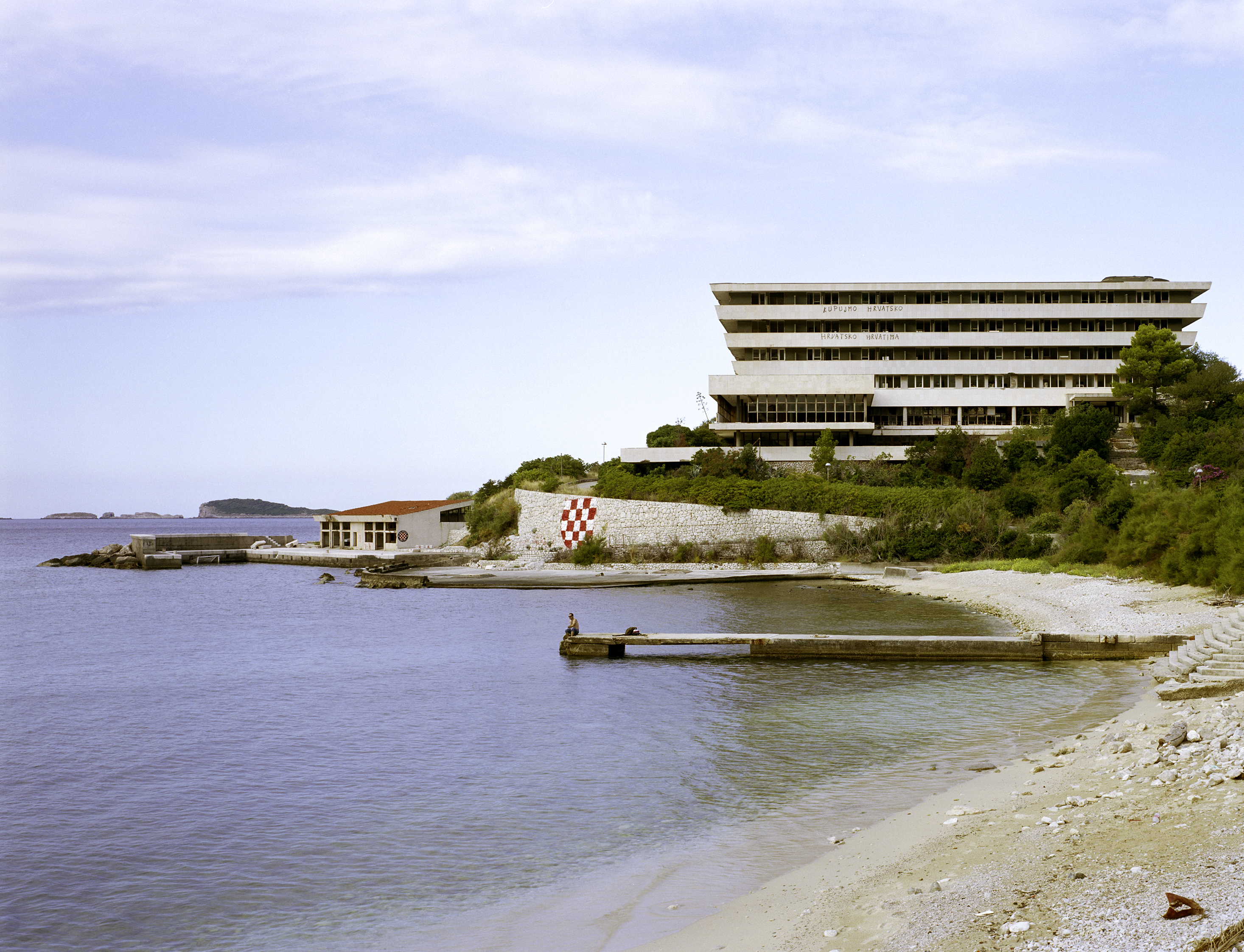 Tourism is vital to Croatia’s economy today, for the sector accounts for 25 percent of the GDP. After years of war and a long-drawn-out, non-transparent privatization process, Croatia is fighting to re-establish itself as a leading leisure periphery for the European middle-class – and, even more ambitiously, for upper class and nouveau riche tourists from all over the globe. But only a few new facilities have been realized over the last twenty or thirty years. Most of the infrastructure now in use – especially the big, quality hotels and resorts of the late 1960s and early 70s – was built as part of the socialist modernization drive launched under Tito after WWII, when regional planning was highly respected and explicitly modern architecture was part of the corporate design of the nation.

The exhibition offers a genealogy of large-scale tourist resorts at the Adriatic coast, including their physic and economic transformations after the des-integration of former Yugoslavia, the end of socialist self-management and the beginning of privatisation. Today, depending on their location and the commitment of their new owners, these projects, many of them of high spatial quality, show a wide spectrum of physical restructuring, from dereliction, to refurbishment or – only a few – complete conversion with new luxury amenities for expanding the short summer season.

This exhibition starts with large letterings introducing a quotation of president Tito: “Come and See the Truth!” he used for promoting large tourism resorts run by socialist worker’s self-management as stages for transnational encounter, to communicate the success of Yugoslavia’s third way both to its own population and to its visitors from East and West.

One central organizing design element of the exhibition is a 15 meter long timeline, which follows the graph of tourist overnight stays in Croatia, that steadily increased since 1955, flattened at the end of the 1980s and completely collapsed in 1991 with the beginning of the war. It displays both the most important political decisions triggering tourist development in general as well as the construction most the prominent buildings.

The timeline ends with the current slogan the Croatian Tourist Board “The Mediterranean As It Once Was!” Next to it visitors find two huge posters displaying the derelict Yugoslavian Peoples Army resort at Kupari, decorated with nationalist graffiti, and the interior of the fancy design hotel Lone Maistra, recently opened in Rovinj, that is optimistically promoted as an international showcase for the contemporary Creative Industries of Croatia.

A second structuring element of the exhibition consists of a series of aluminium posts with signs and differently grouped and condensed cubic show-cases, that display selected case studies, which exemplify important sub-issues: e.g. the aspect of social tourism, regional planning of resorts, the variety of big scale hotel typologies, the importance of interior design and art, new serviced apartments in private property, legal security-issues, and ‘resort ruins’. 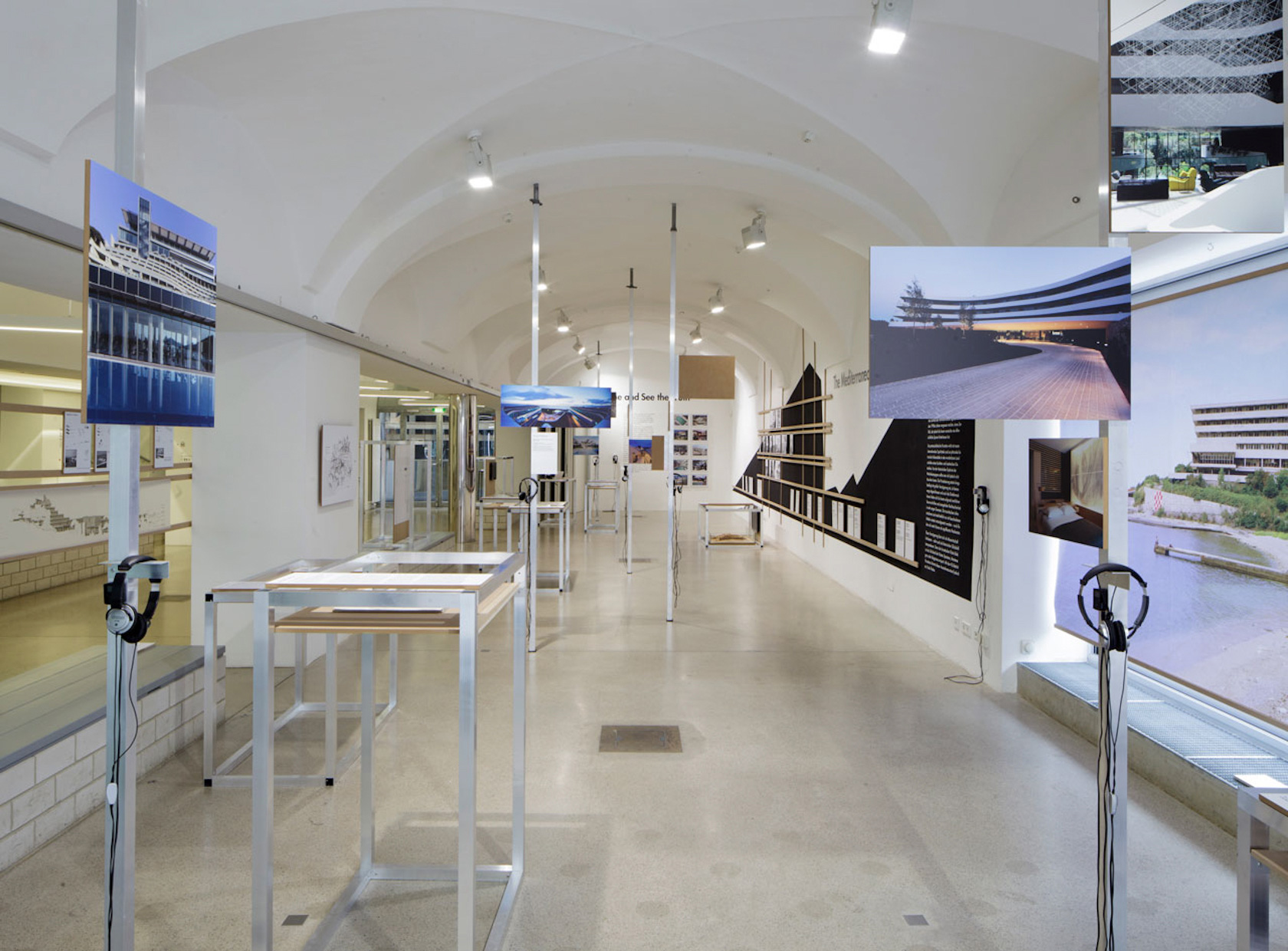 While on the visual level plans, models, and photographs illustrate the planning history and the physical transformations after the disintegration, radio speakers inform visitors in audio-tracks about the political and economical backgrounds of the hesitant, complex and still on-going privatisation process, and shows how certain parties have stopped at nothing to gain a competitive edge.

Rivalries between stakeholders, corruption, unsolved legal disputes and very strict limits on construction activity – and finally the recent economic crisis – continued to hamper investment in Croatia until today. From the angle of protection of the coastal environment, however, the delays may be read as a historic happy turn of fate. Nevertheless, after EU accession in 2013, opponents of international investors’ ambitions will have a hard time standing their ground.

Fashion items and models by Maistra and Valamar